It is already impossible to imagine clothing without checked patterns and they can be found in almost all wardrobes. But does the look also work on everyday objects in the bathroom?
Why not!?!
With our Scotty series, we at RIDDER have implemented coordinated items in the Burberry-style and created beautiful, simple but modern products for the bathroom. In doing so, we have made sure that the Scotty pattern is not too overbearing, but blends harmoniously into your own bathroom.

The polyester shower curtain Scotty is the eye-catcher in the bathroom and harmonises perfectly with the other articles of the series in the colours grey and berry.

Thanks to the subtle choice of colour, the curtain can shine in almost any bathroom, regardless of whether it is designed in classic white or modern black. In the design, we have deliberately avoided full surfaces and excessive checks and lines, thus creating a harmonious and at the same time trendy alternative to heavy patterns.

The textile curtain itself has a water-repellent coating and impregnation and can also be washed in the washing machine at up to 30°C if required.

However, please refrain from using fabric softener or too much detergent and do not dry the textile curtain in the dryer, but simply hang it up. You can also strengthen the impregnation after drying by ironing the shower curtain inside out on the lowest setting.

When it comes to the toilet seat, many people like to opt for the classic white version, because it goes best with the already white bathroom ceramics. Although designer toilet seats are visually eye-catching, they often disrupt the harmonious image of the bathroom or guest toilet.
With the Scotty toilet seat, we combine the visual eye-catcher with the classic, simple and conjure up an unobtrusive design that fits stylishly into the bathroom without being disruptive.
Made of Duroplast, the toilet seat is quick to install and easy to keep hygienically clean. The soft-close mechanism ensures that the lid closes quietly even if it slips out of your hand, protecting children in particular from injury.

The simple style of the Scotty series is the common thread that also runs through the range of accessories. Whether tumbler, soap dish, soap dispenser or toilet brush, each piece is visually coordinated with the other products in the series and fits seamlessly into any bathroom.
Made of ceramics, the individual parts can even be cleaned in the dishwasher if they are very dirty, and our toilet brush has a replaceable brush head.
So that the accessories do not have to be lifted when wiping and cleaning, the tumbler and soap dispenser can be combined with our universal Invisible wall holder and thus attached to the wall.

Waste bins should be as inconspicuous as possible and are often hidden in the corners of the bathroom. With the Scotty cosmetic bin, this is no longer necessary, because it is not monotonous and unsightly, but also adorns the cherished "tartan" pattern. So there is no longer any reason to hide the bath bucket.

Present it in style next to the toilet or washbasin and see for yourself how it harmonises with the other items in the Scotty series and your bathroom.

It's not just the look that's on offer, our cosmetic bin also has something up its sleeve in terms of function: easy emptying thanks to the plastic inner bin is a must and loud slamming of the lid is also a thing of the past here, as this is also equipped with soft-close.
What more could a man / woman want?

Now you know the RIDDER Scotty series, with its unmistakable and harmonious "tartan" pattern!
Our complete range includes almost every style and if you like it even more personal, you can combine your desired item according to your own ideas.

Shower and bathtub mats are designed to reduce the risk of slipping in the bath or shower. For many, the visual appearance and colour design often play a rather subordinate role. So that this no longer remains the case, RIDDER now offers a Limited Edition of shower and bath liners in addition to the already established standard models in a wide range of solid colours.

The unique mats are available in small editions at badshop24 as long as stocks last. Unfortunately, only a small selection of the available colour gradients can be shown in the pictures, as each inlay is unique and cannot be duplicated. From dark red to black colour tones to the most varied shades of blue, which could be a sky shot, to glaring splashes of pink, everything is possible and nothing is improbable.

Unique and yet as usual

As unique as the colour design of the individual shower and bath mats from the Limited Edition are, their quality standards are just as familiar and consistent. Because, of course, these bath mats also have a very high number of suctions cups and are tested by TÜV for freedom from harmful substances and slip resistance. So the usual skin-friendly comfort and the absence of PVC, latex, BPA, phthalates, etc. still apply, which means that this version is also ideally suited for allergy sufferers, children, babies and animals.

As with all other RIDDER shower mats, the following also applies to the Limited Edition: Please follow the care and use instructions. This is the only way to ensure that the inserts fit properly and last a long time.
And the care and handling of the shower and bath inserts is very simple and does not require much effort.

Before use, the floor of the bathtub must be moistened and then the mat pressed firmly into place with the suction cups. Afterwards, you can start your shower, your bath or wash the dog as usual. It should be noted, however, that depending on which bath oils, additives, shampoos or shower gels are used, these can leave a film on the surface of the insert, which can limit the slip resistance.
After use, the rubber mat should be removed from the bath and rinsed thoroughly with clean water. To dry, it can simply be hung over the edge of the bath or on the suction cups on the shower tile. It is absolutely essential to avoid hanging the mats from their holes; these are not suitable for this purpose and the mat's own weight would tear it out after some time. In addition, the bath mat should not be placed above the heating or in direct UV radiation, as this will make the material brittle.

Something so special can't be sustainable? Of course it can!
Our exclusive one-of-a-kind insert is also produced at our facility in Singhofen and can therefore quite rightly bear the Made in Germany seal. The shower and bath mats are made of a so-called single-material, which comes from the EU and ensures that the mats are 100% recyclable and virtually no waste is produced during production. And best of all, the waste heat from the machines is used to heat our production halls.
But that's not all, unlike goods from the Far East, we have short transport routes due to our german production and thus cause lower CO2 emissions.

The icing on the cake

The Limited Edition of RIDDER shower and bath liners therefore has everything you need and know. But the top argument for choosing one of the few available rubber mats is: no matter which colour gradient is later in your shower or bathtub, you can be 100% sure that no one else has an identical mat!

Get out of the shower and quickly wrap yourself in a soft towel, which is already waiting for you above the elegant Albany towel rail.

The towel rail, just like its matching counterpart, the toilet brush set, gets its special charm from the chic and sustainable bamboo elements.

The free-standing toilet brush set combines three functions at once: toilet paper holder, toilet brush and shelf. The tray can be used variably, no matter whether you want to put your mobile phone or the toilet wipes here.

And of course, the toilet brush head is also replaceable, so that you don't have to buy a new toilet brush or even a new free-standing set when you want to change the brush only.

For the design, we have deliberately avoided large shapes or full surfaces and remain in a uniform symbiosis in terms of colour.

The curtain itself has a water-repellent coating and impregnation and can be washed in the washing machine at up to 60°C if necessary. However, please refrain from using fabric softener or too much detergent and do not dry the textile curtain in the dryer, but simply hang it up.

You can also strengthen the impregnation after drying by ironing the shower curtain inside out on the lowest setting.

Whether you have an alcove shower, a bathtub or need to cover three sides of a shower tray. With our Vienna shower curtain rails, there is a solution for every problem.
Without drilling, gluing or tools, our practical spring rod can be quickly and easily clamped between two walls and holds any shower curtain without further intervention. Variably extendable from 70-115 cm or 110-185 cm, the standard widths for shower trays are covered and if it doesn't fit, the tubes can easily be shortened.

For all other shower trays or bathtubs, there is our universal shower curtain rail, which can be assembled in an L- or U-shape as well as a long straight line to different lengths and mounted on the wall with the help of screws and dowels. The colour-coordinated wall bracket is designed in such a way that you do not have to unscrew the entire construction when replacing or cleaning it; instead, you can simply slide the rods out of the wall brackets.

And if the shower curtain rail seems or is too unstable for you, you can stabilise it with our ceiling support. With a standard height of 55 cm, the ceiling support is adapted to most ceiling heights, but can also be shortened easily if necessary. In addition, the support bracket, which holds the tube of the shower curtain rod, has been designed in such a way that it does not form a barrier in combination with our Vienna shower curtain rings; instead, the rings can be easily pulled from one side to the other. 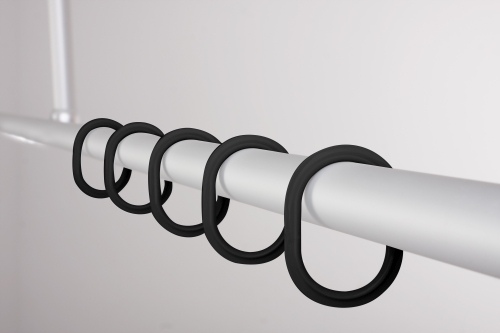